Surinamese Muslims in a Plural Society by R. S. Chickrie


The paper “Surinamese Muslims in a Plural Society” attests that in Suriname, Islam survived since its second arrival in 1873 and Muslims have excelled in this plural society of many races and religions: Hinduism, Christianity, Africans, Amerindians, Chinese, Hindustanis, Indonesians, Jews and Dutch. Muslims who originated from the Island of Java, Indonesia and Hindustan (India) have assimilated with ease in Suriname. This paper summarizes the social and political history of Surinamese Muslims in negotiating with the secular state to meet the needs of their community since their arrival. In doing so, it divulges into the intricate relationship of the Muslims with the state, with other ethnic and religious groups, and brings to light the triumphs and challenges they face in a plural society. An attempt is made to analyze Hindu/Muslim relations outside of the motherland, Hindustani, (India) which has been characterized by mutual respect, and cooperation, but was sometimes antagonistic and mainly due to external factors such as the arrival of the Arya Samajis from North India brining with them the practice of sudhi. After a turbulent period, the relationship today is cordial. The paper asserts that the local Muslims and the state were very aware of the Muslim/Hindu conflict in the motherland and were keen to prevent communalism from engulfing Suriname. Further, this paper exposes the schism that exists among the Islamic organizations in Suriname. It can accurately be concluded that the Islam has become part of the social and political fabric of Suriname. Brief history of Suriname. 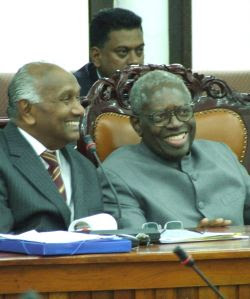 Suriname, a Dutch speaking republic located on the northern shoulder of South America, is one of the most unique country in the world (see figure 1). Interestingly, it is the only country in the world where a mosque and a synagogue face each other and where aspects of Sharia Law (Islamic) were granted to its local Muslim community since 1940. Suriname has a population of about 492,000 and is home to over twenty languages and where the world’s three major religions- Hinduism, Christianity and Islam coexist peacefully (see figure 2).
The multicultural face of Suriname is a result of Dutch colonialism which began in 17th century and the institution of slavery to support the plantation economy. With the end of slavery in 1863, the Dutch turned to India to full this void. Quickly, the Dutch planters used the successful experiment of the British in neighbouring British Guiana, and began importing contract labourers from China, British India and Dutch Indonesia. The Chinese came from Southeastern China, while 33,000 Indonesian from 1893 to 1940 came from the Island of Java. Between 1873 and 1916 about 37, 000 East Indians labourers came mostly from the Indian States of Bihar and Uttar Pradesh, and the former United Provinces and Oudh. (see figure 3). Thus, it was under these historical circumstances that Islam arrived in Suriname, first among the West Africa and then with the arrival of Hindustanis and the Indonesians. Suriname was a Dutch colony until 1954 when it became an autonomous province within the Kingdom of the Netherlands. Unlike, the French and British, the Dutch were not interested in “civilizing” the Asian. Dutch policies towards the different ethnic groups were “off hands,” and quickly the Dutch embraced ‘asianization.” A validation of this was the Asian Marriage Decree (Muslim Marriage Act) adopted by decree of the governor in 1940. At the end of Word War II, a number of ethnic and religiously oriented parties blossomed, and in 1975 when Suriname left the Kingdom of the Netherlands, it had one of the highest standards of living in South America. This once prosperous country just after independence in 1980, was rocked by several coups led by Colonel Desi Bouterse. 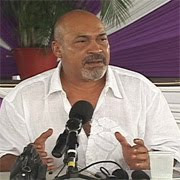 Inflation and devaluation of the Surinamese guilder brought standard of living down. Today, democracy has been restored in Suriname and with tightened fiscal policies, the liberalization of the economy, and the introduction of the new Surinamese dollar, the economy is steadily growing. Suriname today is making great economic and political strides.
Islam in Suriname


The Muslim population of Suriname is predominantly made up of Hindustanis who belong to the hanafi madhab, while the Javanese belong to the Shafi theological school of Islam. A small group of Africans are Muslims and they were the first Muslims to set foot in Suriname, and have given Suriname some of its heroes, like Zam-Zam and Arabi of the Mandinka clan. With the arrival of the Hindustani and Indonesian, the Muslim population of Suriname grew to 25% up until the 1980s; however with the generous offer of Dutch nationality, thousands went to the Netherlands. From the 1970s to 1980s an estimated 200,000 Surinamese left for Holland. Today, the population is estimated at 20% of the population, but the data of the 2004 census puts the figure at 13%. There could have been some flaws in the data collection which may not reflect the true religious affiliation of the people. 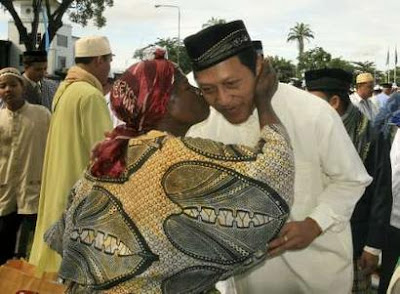 There are over 100 mosques in the country and elements of Shariah, Islamic Law have been incorporated into Suriname’s Civil Code since 1941 when Governor Johannes Kielstra by decree passed the Asian Marriage Act which ended in 2003.1 Going back to the late nineteen century in Suriname, the Muslims have had some charismatic political, civic and religious leaders such as Munshi Rahman Khan, Hazrat Ahmad Khan, Kallan Khan, Habiboel Rahman, Moulvi Shekh Ahmadali, Karmat Ali brothers, Kallay Khan, Abdoel Hafiez Khan, Gul Khan, Haji Mohammed Islam Ramjan and Mohammed Hassan Ashruf. These leaders constituted the local ullema who had enjoyed great religious legitimacy. Many of these men spoke Urdu, Persian and Arabic and were very verse in Quran and hadith. There is something to be said about Gul Khan who was an Afghan refugee. He spoke Arabic, Urdu and Persian and was versed in the Quran and fiqh, and he came into confrontation with the colonial authorities and some of his fellow Muslims when he lectured them about the paying and collecting interests; he also addressed the issue of bidah or innovations that had penetrated Islam in Suriname. He was exile to his homeland and during his absent he became a hero, many named their sons Gul Khan after him. Many felt that the wrath of god had descended on them when they lost their wealth and cried dearly for Gul Khan.2 These men were shaped by events at home and in the motherland, India, as the Hindu/Muslim conflict in India raged , , leading up to the division of the subcontinent, it had serious repercussion for Hindu/Muslims relationship in Suriname.
The Muslims of Suriname have always been politically and economically active. Naturally, Suriname’s first political party, the Muslim Party was founded by Janab Asgar Karamat Ali in 1942 who had a volatile relationship with the United Hindustani Party (VHP), a Hindu political party. The Muslims did not want to be dominated by Hindus from the bitter experience of events in the homeland.
Today, the Muslims are well represented in Suriname’s Staten (National Assembly), and they face no discrimination. In fact, the country once had a Muslim Prime Minister, Janab Liakat Ali Khan and a Muslim Foreign Minister, M. A. Faried Pierkhan, and prior to that, many Muslims served as members of the National Assembly. The state accommodates Muslims for their religious obligations like giving them time off for the Friday Jumma prayers and Ramadan. The end of Ramadan, Eid-ul-Fitr is a national holiday, and Suriname is a member of the Organisation of Islamic Conference (OIC) and the Islamic Development Bank (IsDB) since 1996. The country has since appointed three envoys to the OIC- Dr. Anwar S. Lall Mohammad, Maurits Hassan Khan and Mohamed Rafeeq Chiragally who have all traveled to some important Islamic countries to forge ties on behalf of the government of Suriname. 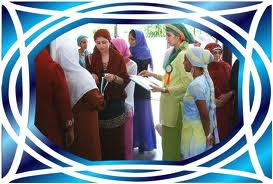 There are about eight jamaats (societies) in Suriname- Hidayatul Islam, (1921) Khilafat Anjuman (1931) and Surinaamse Islamitische Vereniging (SIV-1929). These are some of the earliest organization in the Suriname and they still exist today. Other organizations are the Madjlies Moeslimien Suriname (MMS) founded in 1974 and the Suriname Moeslim Association (SMA) founded in 1954.
The Majlis Muslimin Suriname (MMS) or Council of Muslims in Suriname is an umbrella organization founded in 1974 to represent all the Muslims regardless of race. They have successfully established contacts with the World Muslim League, the World Islamic Call Society, the International Islamic Federation of Student Organizations and the Islamic Missionaries Guild.3 The masjids in Suriname have institutionalized social welfare programme to address the needs of their communities like the Catholics churches. They have established an efficient social infrastructure that aggressively addresses the basic needs of their communities such as homes for the abused and runaway boys and girls. They distribute zakaat to the poor; maintain qabarstan(graveyard), elderly homes, and operate many Islamic schools that offer Islamic studies, adaab (etiquette), Quran, math and the sciences. These religious schools have received government subsidies since 1950 when the National Assembly of Suriname voted to subsidize all Hindu and Muslim temples and schools to end a the discrimination of aiding Catholics and Protestants institutions for over a century. Finally, this injustice was corrected, Suriname and its Muslim citizens have come a long way forward. Suriname today prides itself as a showcase of multiculturalism.
The rebirth of Islam- the arrived of the Hindustanis